The Torment Of Hillary Clinton Gets More Delicious By The Week.

Poor Hillary, after tonight's results in Kentucky and Oregon she must be soiling her Depends®. The nomination, indeed the Presidency was supposed to be hers on a silver platter in 2008. Then the usurpor Obama stole her glory. 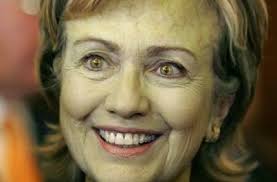 Now after eight more years of fecklessness, corruption and incompetence, Obama's, Congress's and particularly her own, public disgust has brought forth Donald Trump and Bernie Sanders. All Hillary can do at this point is watch as her prize once again appears to be slipping from her grasp and hope that she can out run the primary process.
All eyes will be on California. If she loses there by any kind of margin it may well be Hillary and the Democrats that face a brokered convention and political chaos.
If anyone had written the story of this year's political season as a piece of fiction, no publisher would have touched it. They would have dismissed it as too absurd to be believed.
Posted by JWMJR at 1:55 AM