Changing The Tune Before The Changing Of The Guard.

Even before Donald Trump marched to an over whelming victory in his native New York and swept through the rest of the Northeast by phenomenal margins, the meme coming from the Cruz campaign and the legless "stop Trump" operations was that the Indiana primary would be "pivotal" and would at last change the momentum of this primary season.

Well the Indiana primary is but two days away and now we are hearing that it is California that will be "pivotal". Seriously? Either these camps think we have short memories or little comprehension of the English language.

I get it, Indiana is a tough state when it comes to political polling. The divide between upstate and downstate are marked. Trump is up, Cruz is down, Cruz is up Trump is down. If I had the copywriter on the phrases I could have made a small fortune. If the is one thing however that has been consistent it has been the failure of the "experts" of the pundit class to predict what Donald Trump will do and how the public will rally around him. 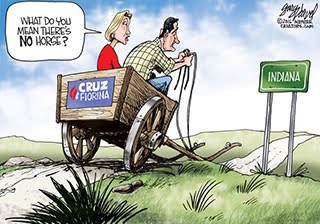 In poker there is something called a "tell". That Cruz and the RNC establishment have pivoted from call in Indiana to now applying it to California is s big fat "tell" that their internal polling numbers and their own readings of the on the ground situation aren't living up to their public bluster and propaganda.

It would be foolish to think that Cruz will drop out of the race after Tuesday. There are bigger issues in play than just Cruz's maniacal quest for power. Namely the neocon establishment's faltering grip on the reins of power. They have held them firmly since Ronald Reagan left office if not before before. They won't let go without a fight.

There is another tell in play. That being the growing calls in the media and from party insiders for a third party candidate "should" Trump secure the nomination. They tried it in 1980 when Reagan won the nomination with an unknown Republican Congressman who stood not a bit of a chance, whose impact was nonexistent and who quickly passed into oblivion.

For all their bluster about Trump no being a conservative the real choices they will have to make is quite simple: Do they fear and loath Trump enough to risk at least 4 years of another Clinton in the White House?

There have been several propaganda pieces lately about so-called mainstream Republicans definitively saying they would never accept the VP slot running with Trump. More importantly there has been absolute dead silence about who will step forward to have the albatross put around their neck of putting Hillary in the White House and possibly shoveling the dirt onto the grave of the Republican party. Oh they might find another John Anderson but not a single one from the neocon establishment from Mittens to Kasich will risk being that sacrificial lamb. They will all run away to fight another day and hope that as the standard bearer Trump doesn't replace the RNC in it entirety.

But then what should we expect? They have proven themselves spineless cowards time and time again for the last eight years. They aren't about to evolve from the blood sucking lampreys they have always been into something else overnight. Let's be rid of them for once and for all.