Throwing Myself Into Other Things Or...

More toys from the model shop.

This first one is a model that Revell first produced in conjunction with release of the movie "Away All Boats" in the mid '50s. 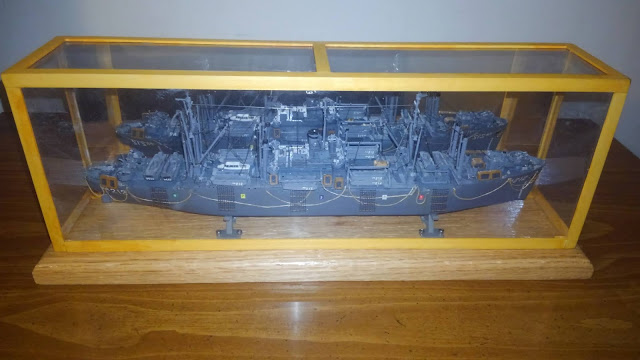 The model of USS Montrose APA212 was part of Revell's "flat bottom fleet" that raised questions whether they were intended for display or for father's to build and kids to play with until all the small parts broke off and then demand that their father build another one.

The latter was probably the more lucrative business model initially but over the years it has continued to be produced by Revell, it's sister company Revell Germany and by at least two subsidiary companies under different company names.

In spite of this unrealistic design flaw and others, the model does lend itself to some serious detailing possibilities.

The detailing done her starts with the 5" mount which while the original piece is used, it now sits in a more realistic raised gun tub.

All of the life rafts here and throughout have had a fine open mesh fabric added to simulate the hemp/canvas straps that were used.

The embarkation nets were made using a slightly larger open mesh fabric with pieces of .015 steel wire painted brown and woven through to simulate the 4x4s used.

Close inspection also reveals some of the 20mm Bofers mounts. On the original model these 20mm guns were part of the deck. They appeared as nothing more than a raised feature that had no elevation above the surrounding guntub. These raised features, I wouldn't call them any more than that, were removed with a Dremel tool. Once a nice flat face was attained new center hole were drilled and replaced with guns from other, far more accurate models.

The careful weaving of lines around bollards and drapped along the hull can be seen here. Most all of the holes through which these lines pass had to be hand drilled as most were depicted as a raised edge that could be painted black. A short section of fine jewelry chain is used to depict the anchor chain on the forward winch. Both the quad and twin 40mm mounts came from other models. The original ones were poorly executed to say the least. The center stack of life rafts likewise came from other models.  The two range finder tubs were completely empty originally so again holes were drilled and units from other models put in place.

In this starboard side view can be seen the Captain's barge, again scrounged from another model is rigged up and ready to be put over the side. Another of the flaws in the original model design was deck railings that were molded into the parts. These were all carefully removed with an exacto knife and replaced with photo etched brass parts. All of the crane rigging is done with regular sewing thread stiffined with lacquer. This was without a doubt the most painstaking process in the entire build. Looking at the main boiler stack can be seen a searchlight platform supported by more photo etched brass. This feature is a detail not found on the original model.

Now as to the real USS Montrose. She was one of some 238 ships designated as APAs. Her design was a modification of the liberty ship design that was vital to supplying Britain and Russia. She was one of over 100 ships in her class that were built primarily for the invasion of mainland Japan that never came. Her actions in World War II came at Okinawa and later occupation duty.

She later found service ferrying supplies and troops for the Nationalist Chinese in their fight with Mao's communists. Fighting communism would be her calling for the rest of her career.

Next came service in the Korean war ferrying troops and supplies to the Pusan Pocket and McArthur's end run  landing at Inchon.

After a long maintenance and refit she again saw service against the communists, this time in Vietnam where she supported both ARVN and American troops in amphibious operations for nearly four years.

I built this as both a gift to an old Highschool friend who went to Vietnam and is now president of the local American Legion lodge. It will be going his way once I finish making tags for the display and figuring out how to best ship it some 3000 miles.

Yes It Was Stolen.

Widest possible sharing authorized and encouraged; share via copy and paste. Be sure to include my name, so the left can understand I am not afraid of them and perfectly willing, on my own ticket, to fight: