The conservative voters who cast their ballots for Republicans on the basis of their opposition to Presidential amnesty, Obamacare, out of control spending and the like are at this point disappointed, dare I say angry at the mainline Republicans aligning with Democrats to pass yet another massive spending bill. If this were just a short term continuing resolution too keep government functioning until the new congress is seated the reaction might not have been so visceral, but this was a 7 month funding bill and little more than a sell out to Wall Street. None of us should be terribly surprised really.  What the politicians and the news media doesn't want the public to know is that when it comes to inside the beltway there are three political affiliations.  You have those who call themselves Republicans, those who call themselves Democrats and most importantly those who are owned, lock, stock and barrel, body and soul, by the Wall Street financial interests.  Of this latter group, this affiliation to Wall Street is binding and they merely disguise themselves as either Republicans or Democrats.

This is the result of the existence of several factors. Namely that we have allowed ourselves to become burdened with career politicians (no term limits on Congressional offices), we have stolen the sovereignty of the individual states with the passage of the 17th amendment and we have allowed Congress to abrogate its responsibilities under Article I Section 8 of the Constitution by its creation of the Federal Reserve Bank and allowing it to control the creation of the nation's currency.

Make no mistake, harbor no illusions, this bill was not some work of bi-partisanship, it was the work of the party of Wall Street and had absolutely nothing to do with so-called traditional party affiliations.  Those who opposed it were not a coalition of conservative Republicans and radical Democrats but simply a combination of those conservatives and Democrats who either lie about or are so deluded as to believe that there is a difference between the fascist statism of Wall Streets moneyed interests and the neo-socialist/communist statism of the left.

If any one has any doubts about this they need only examine the political contribution lists.  On average those Democrats (the Clinton wing, for lack of a better term) who voted for this corruption received twice as much cash from Wall Street as those who did not.  Further proof is demonstrated by the included language that allows Wall Street institutions to once again back their derivatives trades with FDIC insured instruments.  A practice that had been banned under the Frank Dodd legislation.  This puts the taxpayer directly on the hook for several hundred TRILLION dollars of dubious (i.e. worthless) commercial paper.  The potential losses in Credit Default Swaps alone dwarf the bank bailout under Bush 43 by a factor of a hundred if not several hundreds.  These derivatives are what even Warren Buffet has called "weapons of mass destruction."

With nations like Greece again facing financial ruin, (they have become so desperate for hard currency that they have once again started selling off entire Islands in the Aegean Sea.  Japan has entered a path of aggressive deliberate inflation.  The Yen having fallen from the mid 80s to the USD to over 120 to the USD. With their fractional reserve banking policies the FED and Congress have written us into an $18 Trillion hole that is becoming increasingly acknowledged can NEVER be repaid.

Our own elected and appointed officials may not be willing to state the obvious but many foreign nations can see the train wreck coming.  This is why they are slowly and inexorably moving away from the US Dollar based system.  Nations like China, Russia and India are accumulating Gold, Silver and Platinum in massive quantities.  They entering bi-lateral and tri-lateral trade agreements that bypass the US based Swift system in ever increasing numbers.  They are also selling more US Dollar based instruments (US Treasury Bonds and Notes) at a faster pace than they are buying them, unloading large, long term paper (even at a loss) and buying much shorter term paper.

Factor in falling global oil demand along with Saudi/US colluding to keep production high as a purely political instrument against both Iran and Russia and the train grows ever closer and picks up speed.

Unless and until the American public turn out in the streets in numbers and proportions not seen since the Viet Nam War things will only get worse. The career politicians have to go, on mass. Any Congress critter who has served more than 4 terms in the House and/or 2 terms in the Senate must go.  Legislation must be put in place to begin the process of repealing the 17th amendment.  Further action must be taken thoroughly audit the Federal Reserve and then to quickly put it on the path to extinction.  The "Full faith and credit" of the US dollar has run out and will only be restored to a sound asset based monetary system.

Time grows short. With the latest Supreme Court decision allowing the police to claim ignorance of the law as an excuse for violating the fourth amendment rights of citizens they have now openly admitted that there is one set of laws for the elite and their enforcers and another for the rest of us.

The noose of naked tyranny grows ever tighter.  But as long as the average citizen remains somnambulated with empty meaningless video games, "reality" TV that is anything but,and endless sports spectaculars there is little chance of these or any real and necessary changes will come about.  I fear our liberty will die of indifference. 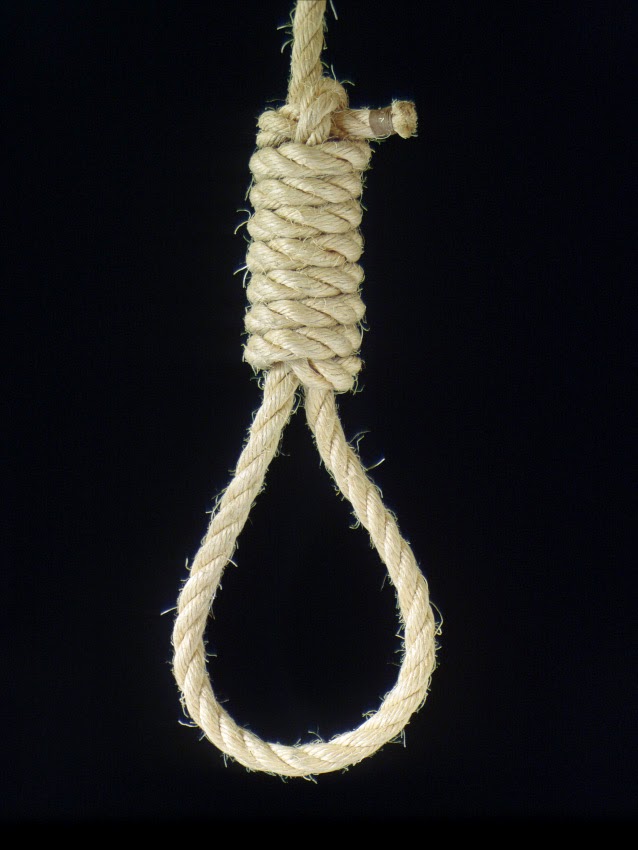 No Bill in New York.

Regardless of the victim's animosity toward the police (because of continued harassment) or the police's obvious animosity toward him bred of arrogance and belief of special  privilege, the root cause of this crime lies with governmental and political arrogance, and their refusal to consider the existence of unintended consequences.

In the process of building the progressive utopian disaster that is New York State and New York City they left has raised and raised and raised again the so-called sin taxes, particularly those on cigarettes.  The reaction has been that some 60% of cigarettes are bootlegged in from other states.  Rather than reducing the incentive for smuggling by lowering taxes, and thus potentially increasing derived revenues, the government chooses to increase enforcement by turning the local beat cop into a revenuer.

However absurdly high the taxes may be on a pack of cigarettes may be, criminalizing the non-commercial sale of single cigarettes is a bureaucratic obscenity.  But then I suppose if Mr. Garner had been selling single joints on the corner that would be considered far more politically correct and the cops would have turned a blind eye.

At the close of the Battle of Yorktown Cornwallis's band played a little number titled "The World Turned Upside Down."  Perhaps we should come full circle and it should become an anthem for the coming insurrection.
Posted by JWMJR at 9:12 PM No comments: