This piece by Danial Greenfield has be getting quite a bit of attention and I thought worth passing on.  His work can be found at http://sultanknish.blogspot.com/

Forget Wal-Mart and skip your local gun show. The murderers of tomorrow will not be found wearing orange vests at your local sporting goods store. They won't have NRA memberships or trophies on their walls. 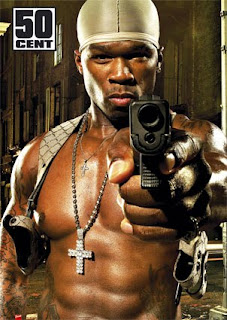 You won't find them in America. Look for them in Obamerica.

Those are the crowded cities of Obamerica. The places with the most restrictive gun control laws and the highest crime rates. These are the places where the family is broken, money comes from the government and immigrants crowd in from some of the most violent parts of the world bringing with them their own organized crime. These are also the places that have run by Democrats and their political machines for almost as long as they have been broken.
Obama won every major city in the election, except for Jacksonville and Salt Lake City. And the higher the death rate, the bigger his victory. He won New Orleans by 80 to 17 where the murder rate is ten times higher than the national average. He won Detroit, where the murder rate of 53 per 100,000 people is the second highest in the country and twice as high as any country in the world, including the Congo and South Africa. He won it 73 to 26. And then he celebrated his victory in Chicago where the murder rate is three times the statewide average.

These places aren't America. They're Obamerica.

In 2006, the 54% of the population living in those 50 metro areas was responsible for 67% of armed killings nationwide. Those are disproportionate numbers especially when you consider that for the people living in most of those cities walking into a store and legally buying a gun is all but impossible.

Mayors of Obamerican cities blame guns because it's easier than blaming people and now the President of Obamerica has turned to the same shameless tactic. The NRA counters that people kill people, but that's exactly why Obamerican leaders would rather talk about the guns.

Chicago, the capital of Obamerica, is a city run by gangs and politicians. It has 68,000 gang members, four times the number of police officers. Chicago politicians solicit the support of gang members in their campaigns, accepting laundered contributions from them, hiring their members and tipping them off about upcoming police raids. And their biggest favor to the gang bosses is doing nothing about the epidemic of gang violence.

80% of Chicago's murders are gang-related. But in 1999 when a bill came up in the Illinois State Senate to try anyone carrying out a firearm attack on school property as an adult, a law that would have affected gang members who often bring weapons to school, the future leader of Obamerica voted present. Had he not voted present, it is doubtful that he would have been reelected in an area where gang leaders wield a great deal of influence.
The majority of murders in the cities with the worst homicide rates are gang-related. And while it isn't always possible to be certain whether a killing was gang-related, the majority of homicide victims in city after city have been found to have criminal records.

In 2010, there were 11,078 firearm homicides in the United States and over 2,000 known gang-related killings, over 90% of which are carried out with firearms. Since 1981, Los Angeles alone has had 16,000 gang related homicides. That's more than twice the number of Americans killed in Iraq and Afghanistan and it's more than the number of Americans who died in the Mexican-American War.

This is what Obamerica looks like. It's a place where life is cheap and illegal guns are as available as illegal drugs. It's a series of war zones whose problem is not the supply of guns, but their own social dysfunction. It's the war that we aren't talking about, because it's easier to talk about the inanimate objects being used to fight that war. 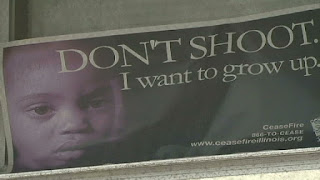 Reformers in the twenties blamed the plight of the slums on the availability of liquor. They rammed through Prohibition for the entire country to fix the cities. The liquor went on flowing and the slums went on being slums. Gun control has been just as successful in healing the slums as whiskey control was. And like the dry reformers, gun control advocates insist on trying to apply their solution on a national level, when the problem is not nationwide.

There are, as John Edwards said, two Americas. America is a country that runs pretty well on its own. Gun sales in America do not lead to bursts of homicide. If the power goes out for an hour, there is no epidemic of looting. The new year isn't rung in at the morgue. Social dysfunction exists but it never affects the majority or even a sizable minority of the population.

And then there's Obamerica. Not all of Obamerica is broken, but a lot of it is. Obamerica has a big gap between the rich and the poor. Its middle class is always on the run. Its upper class retreats to fortresses. Its lower class is broken and constantly growing as its political machines feed off human misery and exploit social dysfunction to gain votes.

America does not have a gun violence problem. Obamerica does. And Obamerica has a gun violence problem for the same reason that it has a drug problem and a broken family problem. These social ills cannot be solved by banning something. The War on Guns is not going to fix the inner city just as the War on Drugs didn't. Rigid law enforcement can keep the numbers down, but does not deal with the causes of the violence.

Obamerica is a bad place. It has great restaurants and night clubs. It has a lot of noise and a lot of light. The next big thing in music will probably come out of there. It's where your kids probably dream of moving to when they're teenagers. But for all that it's fundamentally broken.

Democratic leaders and machines, combined with liberal social workers and justice crusaders have run Obamerica into the ground. Obamerican cities used to be the homes of industry and progress. Now they're places where young Black and Hispanic men kill each other in growing numbers.

In America, guns are used for target practice and for hunting, and on rare occasions for self-defense, but in Obamerica guns have only one purpose, as so many liberals have pointed out, like so many of the young men who walk the streets of Obamerica, they exist only to kill. The guns get blamed and the killers rotate through the revolving doors of an overburdened justice system. And then the politicians who sit around the table with gang leaders announce that they have a new initiative to get guns off the streets.

America does not need gun control. It is a mostly law-abiding place. And gun control cannot help Obamerica. Not when its murder rate is driven by gangs who have no trouble obtaining anything; whether it's legal in the United States or not.

What can help is talking about Obamerica. AIDS prevention was sabotaged by the claim that the disease was a general problem spreading through the population. It wasn't. Neither is gun violence. Despite the occasional exception created by high profile suburban shooting sprees, this is not an American problem. It’s an Obamerican problem.

Adam Lanza is as much of a plausible poster boy for gun violence, as Ryan White was for AIDS. A better poster boy for gun violence might be Jay-Z, who boasts of having been a drug dealer and claims to have shot his brother at the age of 12. The drug dealer to millionaire rapper is the Horatio Alger story of Obamerica. And Jay-Z can be seen partying with Obama, the political king of Obamerica touching base with its cultural king.

If Obama really wants to get serious about gun violence, then all he has to do is turn to the man standing next to him. But Obama, like every Chicago politician before him, don't want to end the violence. The death toll is profitable, not just for rappers writing bad poetry about dealing drugs and shooting rivals, but for the politicians atop that heap who score money and gain power by using the problems of Obamerica as some sort of call to conscience for the rest of the country.

Most of all this country needs to have a conversation about the direction it's headed in. We need to set aside the same old tired social justice rhetoric that has done nothing except train .001 percent of the young men and women of Obamerica to be community organizers and race card wielders and have a serious conversation about what is wrong with New Orleans, Detroit and Chicago. 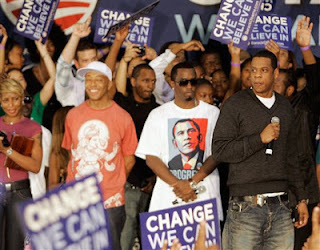 Obama has become a role model to millions of people in the Black community. You can see posters and photos of him in every barbershop. If anyone can address these problems, it's him. But instead of trying to solve the problems of Obamerica, instead of doing something about the high levels of unemployment, the broken families and the glamorization of drug dealing and violent crime, he wimped out and picked a fight with the rural Americans that he derided as gun-clingers.

In the same hollow tradition of macho posturing common among the men responsible for much of the violence in Obamerica, he chose to show his power in a fight for dominance with a perceived rival, rather than give back to his community. Rather than looking to the hearts and minds of his followers, he went after the guns of those he sees as his enemies. That is what distinguishes a thug from a leader. Leaders uplift their people. Thugs use them up as cannon fodder in their own private power struggles.

The legacy of Martin Luther King reminds us that a leader speaks difficult truths even to his own people. There are such leaders in the Black community today. Obama is not one of them.