Another Project From The Back Yard. Rev 1. (New material about material and construction.)

Having been born into the Episcopal Church oh so many years ago I was early in life instilled with a respect and reverence for the 1928 Book of Common Prayer. That and being of English ancestry also brought me a love of antiques.

Close to thirty years ago I joined a newly formed church attached to the Anglican Catholic Church, primarily because they adheared to the old Liturgy that the Episcopal Church has abandoned. While there I completed the call to service bell I mentioned in an earlier post.

Shortly after one of my fellow parishioners asked me to restore an old Sacramental Tabernacle she had found. It was in terrible shape after decades of the worst kind of neglect. Rust was eating at the wrought iron frame and some of the sheet metal back panels were rusted through. Parts of the brass outer panels were deeply pitted and corroded.

I harbored no illusions that it was going to be anything but a daunting task.


I started with disassemly and preliminary primer painting to try and stop the rust. Then as the old the saying goes life happened while on my way to do other things.

It has remained under cover in my storage building for all these years.

Once I neared the final stages of my latest bell I knew this was an obligation that had to be completed.

In the intervening years some clever soul created the metal impregnated nylon rotary brush. I had been doing much of the fine detail work with stainless steel brushes and lots of elbow grease.

These new brushes accelerated the process greatly when it came to removing the remaining laquer rust and corrusion. There was still fine cleaning to do in those places a power brush could not reach but I saw my path becoming much shorter.

Next came lots of masking tape before I could paint the iron frame. This came out quite well. 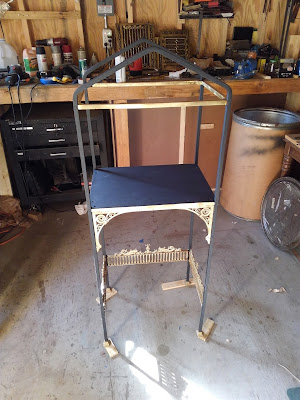 Once this was completed I had to wait several days for this to completely dry before I could mask the new paint so that the newly cleaned and polished brass with clear enamel paint.

The backs of each of these brass panels has a sheet metal back cover that is soft soldered to the brass to form a pocket. I suspect, from the remenants I found in them, they contained some sort of cloth covered paper board.

I decided to not go that route and opted for 1/8" thick hard board panels that I painted a rich Royal flat red color. Once these were thoroughly dry and fitted into place reassembly could commence.

During the course of doing this restoration I came to a few conclusions based on research, examination of building techniques used and the nature of some of the materials it contains.

My first guess is that the number 1076 found on the back of the top front piece is either simply aa foundry mark and unrelated to any date of manufacture or was put their to deceive. Some things are just to perfect. Secondly the frame is no doubt unheatreated high carbon wrought iron. It is very hard, rigid and immalleable. An attempt to drill a couple of small holes revealed a fine brittle grain structure that is guaranteed to break dill bits at a prodigious rate. That idea came to a dead stop right there.

Spark testing confirmed with a grinder that both the frame and the back panels were high carbon materials. These kinds of hard carbon filled materials and the crude soldering technique used both point to age. Short of sacrificing a small piece, which I wasn't about to do, to determine alloy and possible age, that age could be anywhere from the 11th/12th century to late 18th/mid 19th century.

Other elements point to the latter rather than the former. Firstly the use of a brass piano hinge on the front door and a smaller steel one on the back panel. The fact that the brass hinge appears to have been soldered in place as the back panels raises the date question. Also the catch that hold the door in place when closed is a small coil spring loaded ball that falls into a recess in a tab on the back of the door. Certainly no such technology before the later period mentioned. Thirdly the existing screw threads both into the brass and the iron all confirm to UNC 6-32 and the two existing nuts certainly appeared to be old but not that old. Really old ones would have been square not hexagonal.

As to the brass castings. They are clearly done with the very old and traditional sand casting method. The surface finish of many of the flat areas around the perimeter and other areas have, at first glance, a hammered finish. Close examination however reveals that these marks are part of the origional patterns used to make the casting molds. 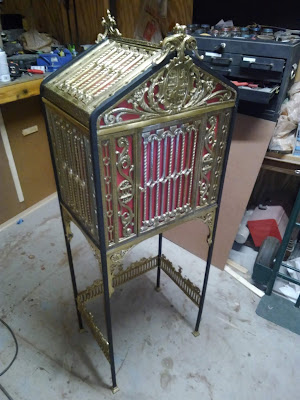 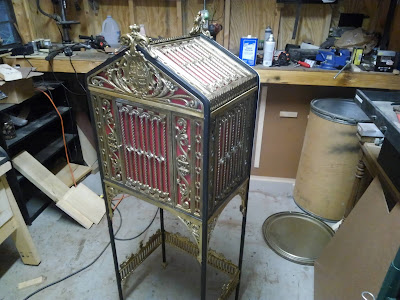 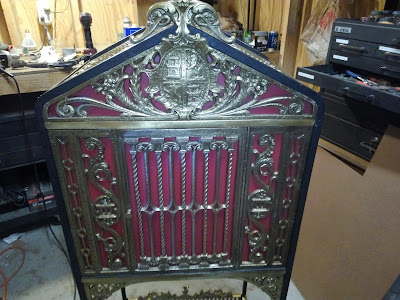 My conclusion is that the origional design my have been 11th/12th century. Or it could be entirely fantastical and imaginative of some late 18th early 19th century craftsman.

Whatever the case, if I do say so myself, the final results of the restoration are quite stunning. I'm looking forward to seeing it in place in the Church Sanctuary and used in the Holy Eucharist.