Going To Lengths To Ignore The Obvious. 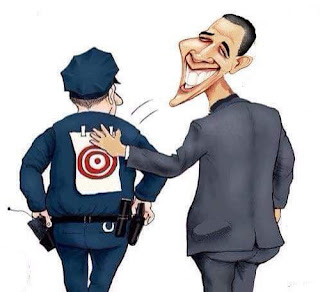 It doesn't take some sort of genius to draw connection between the escalation of Islamic slaughter and the sudden explosion of assassinations of police officers. Anyone who has been paying attention knows that the Nation of Islam's Louis Farrakhan has for decades been claiming that white people are "devils" who do little more than plot ways to murder blacks.

Neither is it some unknown that Malik Shabazz and his New Black Panthers are steeped in radical Islam and racial hatred.
It takes nothing more than a cursory search to find videos of Shabazz and his associates spewing their blind hatred of whites. Some of these same despicable people are the ones that Obama's former Attorney General gave a deliberate pass for intimidating white voters in Philadelphia. Again the video is readily available.

Now video evidence has been found that the Baton Rouge killer had been a member of the Nation of Islam and openly hated whites. Again I have to ask: What will it take to force the government to act? Why does every statement by a white get challenged as racist or "triggering" by Democrats and the media, yet open hatred by the likes of black Islamists and the Black Lives Matter movement draw nothing but a blind eye.

The most obvious fact being ignored by the politicians and the media is that if the police really wanted to see more blacks killed all they would have to do is withdraw from patrolling black neighborhoods and then stand back and watch them slaughter each other in numbers greater than any "police conspiracy" could ever achieve. There have been over 3,400 homicides in Chicago since Obama took office. The vast majority of the victims have been blacks murdered by other blacks. Yet the President remains all but silent about that carnage and condemns the police for being forced to make snap decisions when confronting violent criminals.

Add in the fact that Islam has been using the prison system as a recruiting ground for decades and that numerous of our feckless politicians including our deceitful President have openly met with and even praised the likes of Farrakhan and you have a recipe that will produce nothing but further violence and death that will be met with nothing but words and inaction.

May the good Lord spare us all from such arrogance if not treason. Sadly I suspect that there are going to be many more innocent dead before there is any resolution in the conflict between Islamic 7th century barbarism and western civilization. Not here at home, not in Europe and most certainly not in the already blood soaked Middle East.
Posted by JWMJR at 9:04 PM