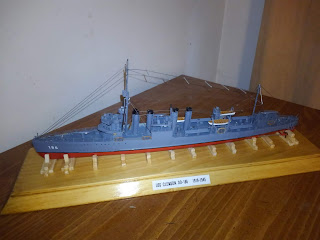 Some would say that that was an ignominious end for a noble ship. Others would argue that it was symbolic of what she, the crews who sailed in her and so many other ships were fighting for in the first place.
Posted by JWMJR at 1:57 AM 1 comment:

More Adventures From The Backyard Workshop

The guard is made from a piece of 316L stainless steel 2" schedule 40 seamless pipe. This was cut in half longitudinally. There is a piece of 1/4" cold drawn carbon steel square bar welded into the bottom with 309 stainless filler wire.

This allowed the previously shaped and sharpened blade to be full penetration welded to the square bar using high strength E80S-B2 vanadium steel filler wire. Short intermittent sequence welds we're used and allowed to cool thoroughly before the next sequence was applied. This sequencing prevented the blade material from heating up to the point where the temper would have been lost.

The Handle is made of two pieces. The main portion is made from 1" cold drawn 12L14 carbon steel hexagonal bar. The pommel is 1-1/4" 420 stainless steel round bar. These two were welded with 309 stainless steel filler wire. This assembly was then carefully tacked and welded to the to the outer side of the pipe section in order to maintain axial alignment with the blade.

The balance point is about 1-1/4" from the base of the blade so it can wielded with either one or two hands.

The longer blade is single edged and again made from cold drawn 4140 cold drawn carbon steel. This time 1" x 3/8" flat bar was used. The guard is made from four separate pieces of 1018 cold drawn 1" x 1/4" flat bar. The edge joints were deeply v-grooved, corner and lap joints were full fillet welded. The blade was then full penetration welded to the guard with the same method as above. The handle is made from 13/16" 4140 cold drawn round bar and 1" 420 stainless steel round bar.

Still yet to be made are display boards for hanging them on the wall. These were made for display but the 4140 quenched and tempered takes a wicked sharp edge!

I Didn't Ask For Verification But...Voltaire Is Dead.

In my last post I discussed the, deserved I feel, demise of long time pundit Bernard Goldberg by his own hand, by employing a questionable character to operate his comment areas and allowing him to use the same Alinskyite tactics as the left. His favorite being labeling people as racist, giving them strikes and then banning them.

Today, as a new post was put up, there was a new addition to the comment area. Individuals now are required to " verify" their email address before being allowed to post. This is of course an open assault on both individual privacy and the important concept of anonymous political commentary, especially when dealing with those more concerned with the maintenance authority and influence than with either the truth or honest debate. It is a long standing concept, without which the American revolution could not have been undertaken, never mind succeed.

Voltaire said, "I disagree with what you say, but I will defend unto death your right to say it."

These concepts are already dead in much of Western Europe and are rapidly dieing in American discourse. If we allow this to continue the great American experiment will succumb to fascism. Not the phony fascism of leftist delusions and accusations against the President, but very real fascism. All the horrors envisioned by the leftists will come true. But it won't be Trump who creates them. It will be by the growing coalition of the establishment left and the globalist neocons.

They are already exposing themselves in many ways and not just in the corrupt banning of information sources they don't like. The recent statements of Bill Kristol are more than adaquate proof. That acorn didn't fall far from the tree. His father was an infamous Trotskyite and now that the left is openly endorsing Trotskyite "Democratic Socialism" he is simply returning to his family roots.

This isn't taking the first step on a slippery slope. That step was taken long ago. This is stepping to the edge of a cliff. This is the 21st century equivalent of book burning.   Sadly for us all this is not the first batch of fascist to burn books. That history shows that it doesn't end well is meaningless to them.  As German philosopher and poet  Heinrich Heine noted in 1820, "Where they burn books they will end burning human beings." What was a visionary warning in 1820 is still visionary today.

Bernie Goldberg Buys His Own Demise.

At one point in time, many years ago, I had a certain amount of respect for Bernie Goldberg and his exposes on media bias. He was one of them, he ought to know right?

He was of course ostracized by these very same media outlets and his primary public outlet became a weekly appearance on Bill O'Reilly's now defunked (for good reason) "No Spin Zone".

This has apparently left him with little exposure beyond social media platforms and his own web page.

Sadly, for whatever reason his has chosen to employ a nasty little fascist, who shall remain nameless for now, to monitor the comments on his site.

Maybe it's old age or maybe Bernie is in reality is just as nasty, bigoted and biased as the leftist media moguls who pushed him out. The actions of his resident attack dog and his denials if his corrupt Alinskyite tactics would seem to indicate that he is.

Poor Bernie has long since revealed himself as what is often referred to as a cuck or neverTrumper. He doesn't like the Democrats per se but he can't divorce himself from the insider game of establishment politics and punditry. He just can't bring himself to see that both political establishments lie with impunity and both are doing everything they can to destroy the United States as a soverign nation and drag us into some would be globalist coalition. To that end he was of course a Jeb Bush supporter.

Bush and the rest of the party establishment all failed miserably in the face of the Trump juggernaut and the pissed off American voters.

So now having lost the election Bernie and his attack dog have reduced themselves to using the EXACT SAME METHODS as the leftists in attacking anyone who would dare question there failed judgement. Lie about them, belittle and mock them. Call them racists, call them mentally unstable, whatever it takes to try and drive them off. Do anything and everything EXCEPT engage in honest debate. When that fails they of course resort to that oldest standby by of would be petty tyrants, they ban them from expressing their opinion on their outlets.

This is of course the same thing that was done to Bernie but that unfair treatment apparently has not provided any enlightenment.

Small wonder then that Bernie has not found a new perch on any TV outlet and his hiring of an individual of very limited education and intellect to run his web site.

Well Bernie your methods and hiring of a pernicious coward and ignoramus to run your operation will only accelerate your passing into oblivion on the internet. Censorship and 21st century book burning is a sure prescription for failure. Maybe you've earned it. If it also drags your little attack dog into that hole it's a good thing. Let me throw in the first shovel of dirt.
Posted by JWMJR at 3:32 PM No comments: