I have posted on this subject before but its time to elaborate. Few people understand how energy intensive the paper industry is. I was in the business of suppling equipment to paper plants for a good part of my career I can honestly say I have never been to a paper mill that operated on the public power grid.
Paper production requires three things beyond wood, lots of electrical power, lots of high pressure steam and lots of highly corrosive chemicals. After choping the wood into small pieces and adding whatever other matetials the customer requires, depending on what the end product is, it all goes into what is called a digester along with the first batch of chemicals, lots of chemicals. This produces the slurry which is pressed, dried and has the chemical residue extracted. (Just recently a mill in Jay Maine whose sole product was toilet paper had their digester blow up in a massive explosion. This besides idiot hording was the cause of the recent shortages and price spike, particularly in the Northeast.)
This chemical residue is considered one of the most toxic and corrosive by-products that come out of any industry. It's so toxic that it can't simply be disposed of. So what is done is that it is reprocessed into first "red liquor" and then into "black liquor." This product is then burned as a fuel in specially designed "recovery" boilers to extract as much of the energy back out of the chemicals for use in making needed steam and electricity.
Every paper plant in America has at least two COAL fired plants and at least one recovery boiler. I have been to some plants that had as many as five coal plants and three recovery boilers.
These recovery boilers are considered one of the most dangerous places in the world to work. No one is even allowed to go up onto the tower until they have been through an extensive orentation class. If for any reason there is an internal steam leak or anything else that may cause the boiler's internal pressure to go positive, the alarms go off there is only one rule in effect. Put on a rebreather mask and get the hell off the tower as fast as you can. You don't ask questions because any hesitation can mean a painful death from poisonous gasses.
Now back during the Obama administration they  imposed a new tax on the paper industry specifically targeting this combination of energy recovery and toxic waste disposal. Taxes were imposed upon them based on how much fuel they burned. Imagine if you were taxed every time you properly disposed of your waste instead of dumping it at the side of the road. The fact that these taxes are simply added to the prices the manufacturers charge the customers (thus becoming a tax on the consumer, (i.e. your butt!) is completely lost or ignored by the politicians eho create them. They just give temselves another raise to offset the consequences to them and screw the taxpayer yet again.
This among other things is why you find it so expensive to wipe your butt! Now Biden and the New Green Deal is promising to "do away with fossil fuels" all together. The reality is there is no other way to produce the every day paper products we use. Be it toilet paper or the brown paper bags they insist you bring your groceries home in. So get ready folks. If these stinking communists get their way you will be shitting into a ditch in your back yard and cleaning your ass with your left uand and a bowl of water. Just like the rest of the third world that they are determined to turn our great republic into.
Posted by JWMJR at 2:26 AM 1 comment:

Throwing Myself Into Other Things Part 2

While ships like the one in the previous post are my usual forte when it comes to model building I have, over the years built a few armored pieces. One I built but sadly have no pictures of was an old WWII US Army halftrack set up as a mortar carrier that I combined with an LCM that I sent to an old friend from Rhode Island. I believe he in turn donated it to his local National Guard armory for display there.

This one however is more recent in both construction and historical context, an M1A2 Abrams. 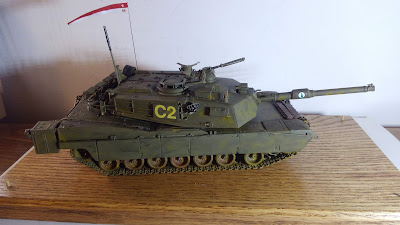 Having inspired myself I went looking for something a little more of a complicated build. I soon settled on the latest upgrade of the M109 self-propelled gun known as the AT Paladin. 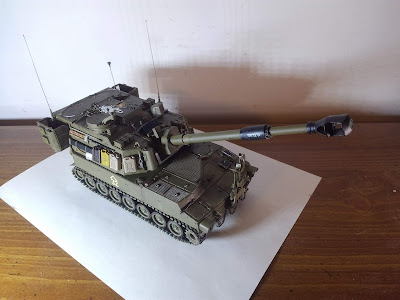 Now as my covid boredom set in even deeper I decided to make display cases for them. That and I hate  dusting! 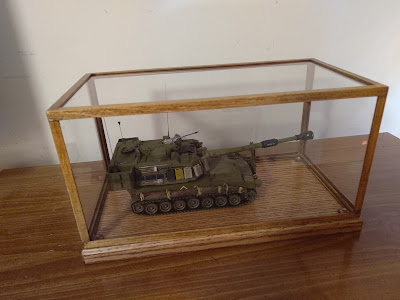 From the very beginning of this Sino-Lung-Rot nightmare we have been told we have to listen to the science. This has included St emphatically that we must wear masks. Now this particular piece of propaganda has been increased to wearing two masks.

I can't see be the only one who is reaching their Howard Beale breaking point. So before anyone starts throwing open windows and banging on pots I thought maybe it was time for some basic ammunition for conservatives and simple arithmetic that even idiot leftist might understand. (Don't hold your breath on that.) So here we go.

We were all taught at a very young age that the area of a circle is determined by a very simple formula. A=π×r2.

For the mask openings...

If you think this massive ratio is going to be reduced by wearing two or three or twelve masks I doubt even a remedial class in arithmetic is going to help.