Sargent Hillary And The Unasked Questions.

So far The Clinton campaign's response to the release of documents hacked from the DNC's servers has been two fold. 1. Blame the Russians and 2. Channel Sgt. Shultz from "Hogan's Hero's". "I know nothing!"

Anyone familiar with the old TV sitcom will recall the above quoted line. You might also recall that the allied prisoners maintained and underground tunnel that allowed them to smuggle people and things in and out of the camp.

Never mind that Hillary is feigning ignorance of any actions taken by the DNC to undermine the Sanders campaign, she hasn't denied it was done at her behest either. I guess we are supposed to beleive that there was no quid pro quo for all those millions of dollars her political fund raising operations funneled into the DNC over the last four years.

We are also supposed to beleive that the security on the DNC's servers was even less competent than what Hillary had on her own private server but that it was sophisticated enough that they can say with certainty that it was the Russians and only the Russians who got in. What a load of horse shit.

Virtually any server system automatically logs all incoming traffic, when they entered, where they went, what they looked at (and or copied) and how long they stayed. Many systems also have commercially available software that automatically back traces and logs the IP address of anyone entering the system. Yes some sophisticated hackers have ways of either going around these systems or entering them and removing their footprints. But even this can leave evidence of data voids where that information has been deleted.

Asking the public to beleive that the FSB are not sophisticated enough to erase their tracks and that everybody else who illegally entered the systems was, is so ludicrous as to be incredulous. Nobody who knows anything about server systems believes a single word of this BS. Neither is anyone expecting the DNC to release the traffic logs from their servers that would actually point a finger at the Kremlin.

Now I'm not saying they weren't there. What I am saying is that if the Russians got in, so did a lot of others. This of course raises a lot of unasked (by the leftist media) and unanswered questions.

Who else got into the system and what did they take?

How many of the other correspondents had their systems subsequently comprimised? This can produce a long daisy chain of compromised platforms.

If the tunnel on "Hogan's Hero's" had really existed you can be sure that they kept strick control of who and what came in and went out. Not so apparently for either Hillary's or the DNC's systems.

Jullian Assange of Wikileaks has promised that these 20,000 leaked DNC documents is just the beginning. Hillary can and should expect a steady drip, a Chinese water torture, of leaks between now and November. 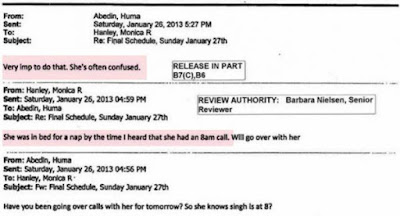 So while you're cooking the popcorn waiting for the next act, ask yourself and anyone who will listen: If Hillary "she's often confused" Clinton and the DNC aren't competent enough to operate a couple of email systems with any measure of security why and how should anyone be expected to think they could operate the massive reigns of government in anything but the most bumbling incompetent manner?
Posted by JWMJR at 2:32 PM