Back Into Other Things 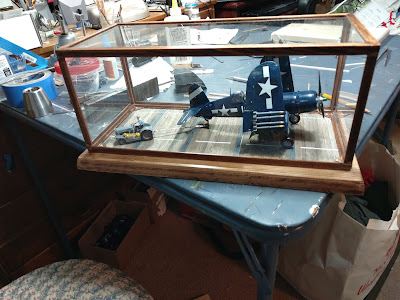 My latest model. This is a Tamiya 1/48 scale F4U1D Corsair. I did some research to make sure I had both the ship designation markings and fuselage numbers were correct for the plane my uncle flew on July 26th 1945. On this date he led his squadron on a raid on Kure harbor in Japan where he dropped a 1000 pound bomb down the stack of the hybrid Battleship/Aircraft Carrier Ise. It exploded in her boilers breaking her keel. He was awarded the Navy Cross for this action. 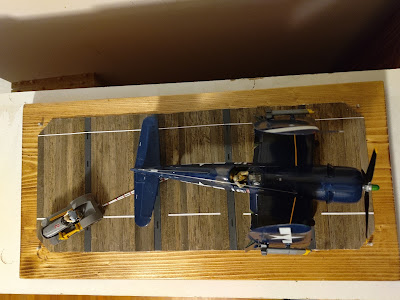 The carrier deck section was made from stained balsa wood strips interspaced with plastic channel painted to simulate the tie down strips used for securing aircraft to the deck during heavy weather. Thin strips of plastic were then used to create the deck markings.

The case was made from a pine base and basswood angle moulding and .020 clear PET sheet plastic.

I always found it a historical curiosity that the Arizona and the Ise were both launched in the same year. The Arizona being our first battleship lost and the Ise being Japan's last.

While the Arizona remains an honored memorial the Ise was raised, scrapped and turned into Toyotas.