And Now For Something From The Back Corner Of The Yard. Part Two.

About two years after I retired from full time work my wife bought us a new storage building/work shop. This was a practical matter in that the one we had had constructed some 26 years earlier had reached, if not exceed, its expected life span given the ravages of time and carpenter bees. As in all marriages we have also accumulated more garden tools and assorted junk that neither of us could come to part with. That and the fact that much of my career kept me on the road, it suffered from plain old neglect.

The new building has twice the floor space as the old one and additionally has two lofted platforms for storing all those thing we never use but can't bear to part with. In the ensuing two years more and more of this building has been taken over as a work shop for carpentry and furniture refinishing. More toy space as my wife calls it was needed for new tools etc.

So the next logical step was to consider building another small building strictly for yard tools and equipment.

As with the last project, I had to conceptualize a design first. This time I had to be careful not to get overly ambitious about what I could do just by myself. With that in mind I called up my design software and in about two days I had the design done and in another two the drawings and material cut lists were complete.

After selecting where I was going to put it, I located supporting blocks and started constructing the platform frame.

Once the frame was complete and final leveling was done 11/32 plywood was attached for flooring.

Now with a stable platform and room to work I started on the frames for the walls.

Next came the roof trusses. 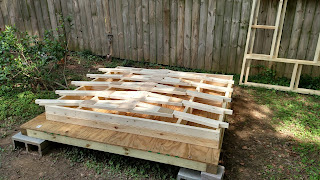 As before with the wall frames, the first became template for the others. Five in total.

I was now ready to begin erection of the building.


It was now time to start puting the external wall pickets in place. 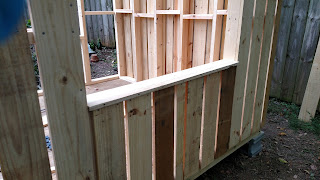 The external pickets were all spaced with 3/4" gaps. Boards in the center were trimmed to maintain uniform spacing. 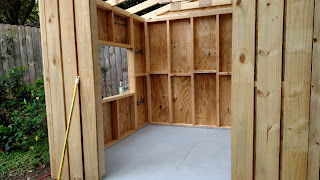 The internal spaces between the studs were then filled with 5/16" plywood and attached with 1" flat head screws. The edges of all of these panels were sealed with caulk.

The end truss covers and corner and edge trim were then installed. 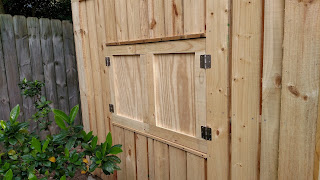 The side opening panels were installed. 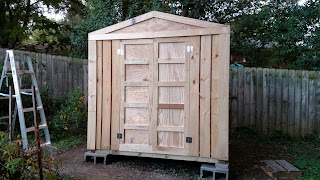 The weather forecast then called for several days of heavey rain. It lasted nine days. 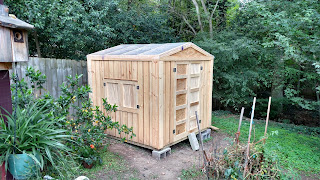 Heavy plastic sheet was stapled to the roof. Even this was not enough to stop mildew from starting.  Several applications of bleech solved this problem.

It was now time to start painting. Putting up the roof panels was going to wait until my son came for a visit. 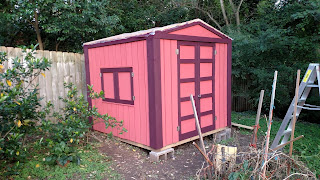 I had plenty of paint left over from when the new building was purchased and erected.

The roof panels are 3/8" plywood, attached with 2" deck screws and painted with three coats of textued deck paint. This should get this structure through the winter. Come spring I will put on a couple of layers of roofing paper and a layer of shingles. 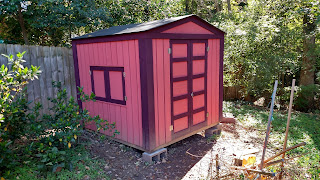 Total cost for this project including lumber, hardware, fasteners and the deck paint used on the roof was just under $700.00. The roofing paper and shingles should be around $65.00.

Before spring comes I will be designing and building a ramp for getting the law equipment in and out.  I may also run a trench and bury an electrical line so I can have a light and at least one outlet inside.