And Now For Something From The Back Corner Of The Yard. Part One.

I don't spend all my time surfing the net and writing blog posts about politics and economics.  Recently I finished a couple of carpentry projects. As I enjoy my retirement, keeping the body active is as important as keeping the mind sharp.

All across the the American suburbs nothing is more ubiquitous than the plastic roll out garbage and recycling cans. Whoever said that a simple, functional design has a beauty all its own wasn't thinking about this particular part of the American landscape. My task then was to find a way to conceal our three cans from view, make them accessable for regular use and for moving to the street on the scheduled day.

The first step of course was to conceptualize a design in my head and then take the concept and turn it into a 3-D design. From this I produced assemby drawings and material cut lists. Having spent a good chunk of my career as a machinery designer this was the easy part.

The basic frame had three sub-assemblies that were put together in my shop. These were then put together at the top of my driveway where the can corral was to be located.

Once the frame was assembled it was lined up an leveled. It was then attached to the fence with 3" and 4" deck screws from both sides of the fence.

Once this step was completed, the forward corners of the end frames were then supported with short sections of pressure treated 2x4. This stabilized the frame structure, took the stress out of the screws attaching the frame to the fence and protects it from rot.

This done, I could then begin attaching the pickets and the doors to the left side.

The doors, like the sub-frames, were pre-assembled in my shop. The next step of course was the remaining end pickets and door.

A forward stabilizing 2x4 was then put in place to prevent the doors from sagging inward from their own weight and to control the final spacing between them. 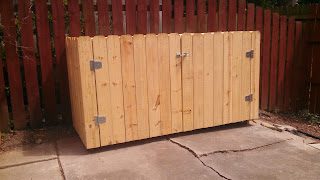 After the closing latch was put in place all that remained was to apply a coat of stain. 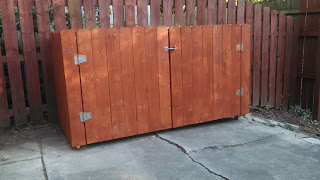 The total cost for the materials to build this, not including the stain that I already had, came to just under $110.00.