Each and every day I become more convinced that leftists either never heard of the concept of unintended consequences, they simply don't care or are completely incapable of seeing anything beyond a hedonistic desire for what they think will be emotionally satisfying in the moment.  I can only guess this is what passes for normal in their closed little worlds as most of them have only been taught what to think not how to think.

My case in point being all the parrot squawking about "extortion".  One inside the beltway talking head speaks the word and they all start squawking in unison as if on cue.  The latest mime being that the Republicans and/or the Tea Party are ready, willing and wanting to shut down the entire government in order to get Obamacare defunded.  There are even some who earnestly hope that it happens as they see that as the death knell of the Republican Party and that that would clear the way for their long hoped for one-party state!  I'd ask one of these idiots if they are insane but I doubt they could even define the term. 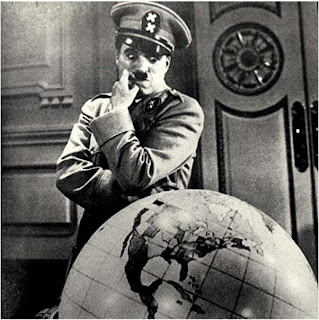 It's bad enough that for leftists compromise means others acceding to their desires, never the other way around.  But I don't think they can even begin to grasp what it means that under a one-party state there is no one left to debate with never mind compromise with.

Ok. So just for gits and shiggles let's say that is exactly just what transpires.  What happens from there?  The Republicans stand their ground, America's debt or at least a substantial portion of it goes into default and the ensuing political and economic pressure results in every welfare queen (no money for EBT, SNAP etc) union member (because they're told to) and college campus moron (again because they are told to) marches and riots in the streets.  The chaos results in either massive losses at the polls for Republicans or the imposition martial law and they are physically removed to placate the rioters.  Then what?  Do these fools think that we could then just pick up where they left off and put the printers at the Eccles Building into hyper drive and everything will be "back to normal"?

Latin America is still in the process of getting out from under succession after succession of one-party state dictatorships, Africa has barely started, Eastern Europe has only recently escaped the yoke of one-party state communism and Western Europe is in the midst of a liquidity crisis even worse than our own.  Seeing the United State devolve into a one-party state is not going to inspire them with confidence that they should continue to keep buying US debt paper.  Just the opposite in fact.  After just seeing the value of what they already hold fall to a fraction of it's face value they are not going to look at this as some sort of BTFD situation.  They'll be out looking for suckers to buy what they already have and they'll take what ever they can get for it and they won't be accepting US dollars.

Next they will be telling the us that they are not going to be accepting US dollars for oil or cars or any of that junk we stock the shelves at Wal-Mart and Bed, Bath and Beyond with either, including food.  They will be asking for gold and they won't be accepting any of those gold plated tungsten bars either.

But what the heck the Democrats will have their one-party state and that's all that matters right?  What could possible go wrong with that?