Recent headlines declare that some of Hillary Clinton's closest advisors have already been interviewed by the FBI. The stories further clame that Hillary will be called for an interview within weeks.

Hillary is going to have to do some very careful maneuvering to avoid being caught in the narrowing gap between a rock and a hard place.

One the one hand the FBI can't compel her to to answer any questions. On the other hand a string of "I refuse to answer under the protections of the 5th Amendment" answers in the midst of a political campaign is some pretty damaging optics.

So much for the rock. The hard place being that although she may think she has a certain degree of certainty as to what her aids were asked and answered, she can have absolutely no certainty as to what information the FBI has from other sources that contradicts their answers or could contradict hers. Additionally each of those aids was told before leaving that they were not to discuss their interview with anyone other than their attorneys, under penalty of obstruction of justice charges. That then presents her with another jagged lobe of the aforementioned rock. Namely lying to an FBI agent during a criminal investigation is itself a serious felony that carries real prison time. Just ask Lewis "Scooter" Libby. Just this week during an interview with Andrea Mitchell she was asked directly if there was any evidence that her email server had been hacked. Rather than answer that she was not an expert in computer forensics so couldn't answer with certainty, she answered just as directly, "no". She had to take the risk. To answer otherwise she would have appeared incompetent, reckless or both.

Neither Clinton nor Mitchel may have realized it at the moment but this might prove to be what is called a "gotcha" question. Seeing as the FBI has the server and rafts of computer forensics technicians you can bet that they already have a definitive answer of their own to Andrea's question.

One cannot be sure either way if Hillary is absolutely certain in her answer or is simply being short sighted, covering her ass or supremely arrogant in her answer. You can bet however that if the Bureau has any evidence to the contrary they will weave a careful series of questions to not just investigate the comings and goings on her email server but to also catch her in a lie. 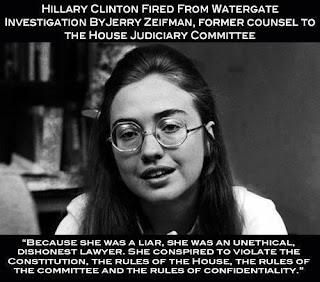 To think that there aren't elements and agents within the Bureau that would love to hang Hillary's scalp from their belt and cynically don't care what they get her for is supremely naïve. Again, ask Scooter Libby what happens when you get caught lying to the FBI.

If I might exercise a bit of my own cynicism, this is a women who said in another recent interview "I don't believe I have ever lied to the public". A weasel statement if ever there was one that pretty clearly reveals that she thinks that there are lies and then there are lies. Can there be any doubt as to why some 40% percent of people in her own party have said they regard her as dishonest?
Posted by JWMJR at 11:46 PM