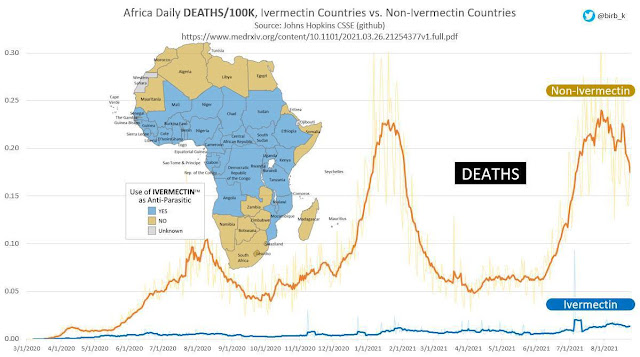 WHERE ARE THEY TRYING TO GO?

While contemplating the above information from JOHNS HOPKINS UNIVERSITY (I've seen reports of similar data coming out of India where Ivernectin is widely being used both in treatment and as a prophylactic, and gawd only knows what the ChiComs are really doing) some questions come to mind that need to be asked. Asked even if it takes at certain measure of courage to contemplate nevermind try to answer them. Questions that have some pretty sinister implications.

I will leave it to the reader to decide who should be asked what questions and held accountable for any answers.

FIRSTLY.Is it possible that someone (individual's/groups/organizations) want to see the African and Asian populations to over time to develope an immunity to covid variants through the long-term use of Ivermectin? Meanwhile are European and Western Hemisphere populations to be decimated by covid and whatever gastly consequences of endless jabs that these so-called vaccines create? And might this be being done to facilitate those African and Asian populations rushing into the void of not just falling Western birth rates but a created growing death rate? Nature abhors a vacuum and all that.

SECONDLY.Do you think that such sinister ideas are beyond the communist scum hell bent on destroy this country? Is not “globalism” just another word for “internationalism”? Did not Stalin justify his mass deportations and exterminations of non Russian populations as necessary to build the “New Soviet Man”/”Socialism in a single state” by destroying old cultural identities”?

We are now seeing instances of open instances of discrimination against unvaccinated individuals with life threatening consequences. Decisions are being made that mean a conscience albeit twisted, sick conclusion hasbeen reached that some lives are no longer worth living. Gee, just where and when have we heard that before? And what did that opening salvo of dehumanizing horror Cascade into?

AND LASTLY.Do you have the courage to ask yourself if Mark Twain’s reminder applies here? “History may not repeat itself but it sure does rhyme.” Was not the immediate aftermath of the Bolshevik overthrow of the Kerensky government a long and bloody civil war?