Given that the New York Times, the so-called "paper of record" has openly stated that journalists should have no compunctions about adhering to any ethical standards when presenting stories about Donald Trump, why would anyone expect anything they produce to be anything but lies and distortions?

If so-called news operations like ABC can deliberately cut away from a live feed at a Trump rally when he starts to talk about Hillary's and Obama's responsibility for not only creating ISIS but providing the conditions that have allowed it to grow, not even claiming "technical difficulties", why then should Mr. Trump feel obliged to adhere to sny rules the media might establish for the debates?

Then when Mr. Trump calls them out for their lies and distortions and naked dishonesty they bellow with self-righteousness about his ethics! Well just what do we expect from a media that is little more than the propaganda arm of the Democrat party except hypocrisy and more lies?

I can only hope that Mr. Trump's operations are quietly planning to turn the first debate on its head and expose both Hillary and the media for the criminal conspiracy, sewer dwelling garbage that they are. I hope during his opening statements he presents them both with a list of question for Hillary that they would never ask and Hillary would never dare answer.

What ever transpires out of it will be delicious! The media assholes will either be forced to ask those questions or look like the bought and paid for fools they are. Hillary will be either be forced to answer them or stumble into an absurd, obstructionist answer such as saying "Under the rules of the debate Mr. Trump isn't allowed to ask me direct questions..." and look the fool herself. 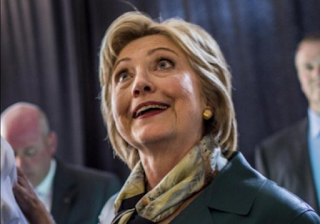 Better yet perhaps she will "short circuit" and get that deer in the headlights look she has displayed so often lately or risk having one of her handlers rush to her side and give her some sort of a key phrase to kick-start her "short circuited" and damaged brain.

Given the avalanche of media attacks and distortions Trump has nothing to lose by such a tactic. Yes those same media outlets will immediately be filled with outrage about how mean spirited Trump's attack on Hillary is, as if she were some fragile child who's "safe space" has been violated and who's feelings must not be hurt by such forceful rhetoric.

But the damage will be done and Trump can then flood the air waves and internet with clips from the live on air meltdown. Even more delicious, short of her slipping into a state of catatonia, will be that Hillary will never let go of the nomination she has coveted and lusted after for twenty plus years.

The obvious question for voters will become: If she can't handle the rough and tumble of a debate how can she handle the unrelenting pressure of the most stressful job in the world?
Posted by JWMJR at 5:33 PM