Sitting on the Edge, Oblivious to What Lay Before Us

“Crisis takes a much longer time coming than you might think, and then it happens much faster than you would have thought.” 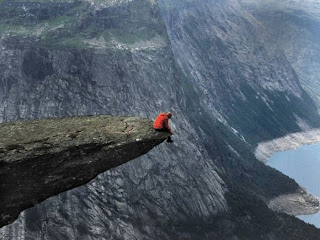 So now we have the latest brouhaha over President Ellsworth, I mean Obama, making non-recess recess appointments to the NLRB and some new so-called consumer protection oversight commission. Don’t hold your breath but someone will start bloviating about impeachment before the week is out. No doubt AG Holder, who couldn’t recognize the foul odor of corruption if he was having excrement for breakfast, will pronounce the actions “technically” legal.

This is a joke right? Congress passed the Frank Dodd bill and the CFTC continues to ignore it, i.e. position limits on precious metals and other commodities have still not been put in place even thought the law required that it be done by June of last year. It’s just more meaningless laws and more meaningless bureaucrats, trotted out as distraction, while power continues to be consolidated in the hands of the elite (of both parties) at the top. Meanwhile the blind partisan hacks will be kept busy fighting over a new bone as our liberties are dissolved into a new legislative morass, known as the National Defense Authorization Act.

Congress passes and the President signs this abomination (the NDAA) that more or less scraps half of the Bill of Rights and the media and the politicians yawn. The police state is here and no one seems to care. Hey the Orange Bowl is tonight and the Super Bowl is in a few weeks, what else could possibly matter right?

I’ve never been a Ron Paul fan, he might be right on target on economic and monetary policy but on foreign policy I think he is out of touch with reality, (evil does exist in this world and no matter how hard it gets slapped down, the bitch that bore it is always in heat). But in the longer term if we acquiesce to the slide into a fascist police state here at home, where the police are allowed to write their own warrants and the courts no longer exist as a neutral abettor between the citizen and the power of government, whether or not Iran has the bomb won’t much matter from inside a detention camp.

More than a few of us would be well served by looking up just how the British enforced the hated “Stamp Act” and how it led to not just the Revolution but the demands for the inclusion of a Bill of Right into the Constitution in the first place. We best open our eyes and speak up or even that right will be gone as well if Congress passes the SOPA (so-called internet piracy act).

We sit at the edge of the precipice and far to many refuse to see.
Posted by JWMJR at 6:51 PM